Law enforcement isn’t a traditional job for women, and Metro Police are trying to change that with the goal of boosting the number of women on the force from 9 percent to the national average of 20 percent.

“Police departments need to look like the community, gender-wise, ethnic-wise,” said Detective Tamia Dow, who works in the domestic violence detail. “To get from 9 to 20 percent is not going to happen overnight, but Cincinnati Police did it (over time). LAPD did it. We think it’s possible.”

Dow is a member of the Sheriff’s Women Recruitment Council, a group of about two dozen female Metro cops, corrections officers and civilian employees who meet monthly to discuss ways to attract women to the force and retain them once they join.

The council was formed under the previous sheriff, Jerry Keller, along with other councils focused on recruiting Hispanics, blacks and Asians. The women’s group languished for a while, but it was recently revived, and the members are infused with ideas.

A television commercial is slated to begin airing within the next few months, and a recruitment video and posters are in the works.

They also want members of the public to get involved — community leaders, businesspeople, educators, church members, anyone — to assist in recruiting women by encouraging them to choose a career in law enforcement.

“I’m telling you, they’re go-getters,” Assistant Sheriff Ray Flynn said. “They’re fired up, and I see a lot of enthusiasm and passion coming out of there.”

As a percentage, Metro has slightly fewer female officers than the North Las Vegas and Henderson police departments, who are at 13 and 11 percent, respectively. However, when it comes to Metro corrections officers who work at the Clark County Detention Center, 22 percent are women.

“Chief (Mark) Paresi’s philosophy is we need to better reflect the community,” he said. “Fifty percent of the community is female, so we should at least shoot for 25 to 30 percent.”

Officer Regina Coward-Holman, chairwoman of Metro’s women’s recruitment council, said women might be hesitant to go into police work because they believe large, tough, muscular men are better suited to be cops, but she said that isn’t so. Women are better at diffusing potentially volatile situations before they turn physical.

“It’s a job that women can do. Women make better police officers in a lot of cases because we’re thinkers,” she said. “Men have to compete with each other over who is the biggest and strongest, and we don’t have that. We’re easier to get along with and more approachable.”

And, because women tend to be better listeners and communicators, they make good detectives, Dow said.

Dow always wanted to be a detective and had her sights set on the DEA or FBI. She was working as a plainclothed security officer at a department store when a Metro officer approached her and convinced her to apply at the police department, she said. Plus, Metro paid better than the federal agencies.

Female officers can be invaluable in assignments such as domestic violence, Detective Domenica Hillenbrand said. She has had victims call to report an abusive spouse and say, “Thank God you’re a female,” she said.

Hillenbrand, a mother of four, was recruited by two Metro officers who were regulars at the restaurant where she waited tables in her early 20s. She worked in vice, posing as a prostitute, and in other assignments, but fell in love with auto theft investigations.

“There’s nothing like the smell of brake fluid in the morning,” she said. “I had two girls while working auto theft investigations. … I was in labor and I was at my desk submitting cases.”

While many female officers get into policing at a young age, others, like Detective Stacy Twigg, turn to law enforcement to bring more meaning to their lives.

Twigg, who works in background investigations, spent 10 years working in the airline industry before deciding she needed a change.

“I wanted to help people,” she said.

Coward-Holman joined Metro 15 years ago as a 25-year-old single mother from a gang-infested neighborhood. She wanted to get off welfare and Metro’s benefits appealed to her.

Some in her neighborhood called her a “sell-out,” she said, but once they saw she didn’t change, she was accepted.

Harney, who has been with Metro for 13 years and works in background investigations, said being a woman works to her advantage.

“I don’t think people quite know what I’m capable of,” she said. “It can be surprising to them. Some people, when I meet them, say, ‘Oh my goodness, you’re a great role model.’ ”

Harney met with a recruiter who visited Bonanza High School, became intrigued and joined the Explorers, a program that teaches basic police procedure, then became a became cadet. She became a cop right after turning 21.

“Women can do more than they think they’re capable of,” she said. “They should be thinking, ‘I can do whatever I want to do.’ ”

The Sheriff’s Women’s Recruitment Council can be reached at 229-5601 or through Metro’s Web site, www.lvmpd.com.

One can only imagine what went on before, during and in the aftermath of 1 October, 2017 unless they were involved. Tamia and the Chaplains of Chaplaincy Nevada were there. They serve the Las Vegas Valley and its visitors and in the days following the horrific attack they were there to support the victim’s families, police, first responders and survivors.

The book was launched on Monday January 22 and has held the #1 new release spot for ten days (at the time of this submission).

All proceeds from the book go to the Chaplaincy Ministry. The Chaplains are all volunteers and all of the trainers that train the new and current Chaplains do so voluntarily.

Tamia is a Senior Chaplain and trains chaplains.

All of the authors and the compiler, Tamia, donated their time, talent and resources in the completion of this and her previous book “Faith Is Inspiring Stories From Las Vegas Chaplains” to Chaplaincy Nevada to help train more chaplains.

Chaplains are “boots on the ground ministers ” in the community. They leave the four walls of their perspective churches and go into the city to serve the needs and needy where they are.

Some people may never step into a church yet they can read our books or meet one of our chaplains in an outreach service and be encouraged and blessed by the encounter.

Please consider support Tamia and her ministry by purchasing her new book. 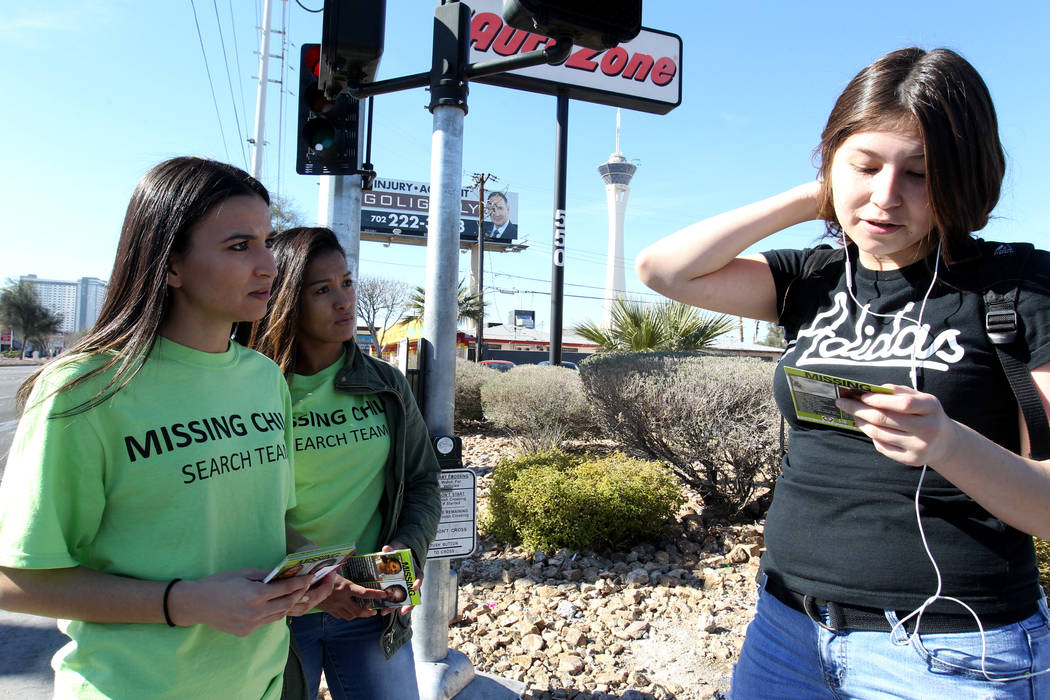 Valarie Goff, left, and Kristel Roxas, hand out flyers with photos of missing children to Vanessa Farfan on East Sahara during The Big Search campaign Friday, Feb. 2, 2018. Farfan said she recognized one of the missing girls, but hadn’t seen her for a long time. Volunteers distributed the flyers throughout Las Vegas. K.M. Cannon Las Vegas Review-Journal @KMCannonPhoto 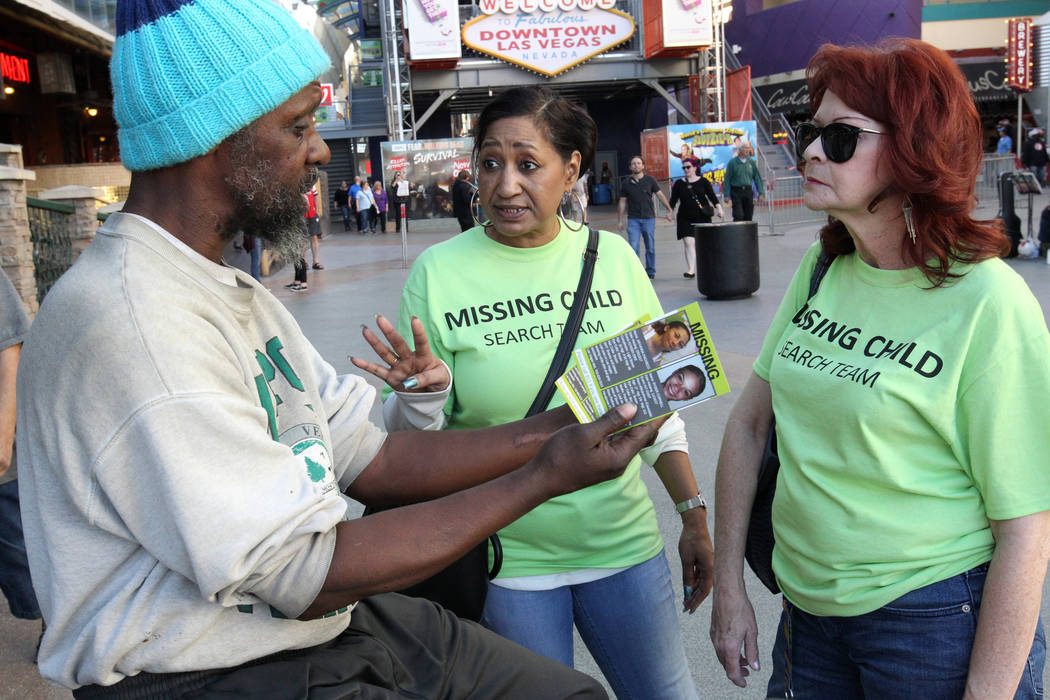 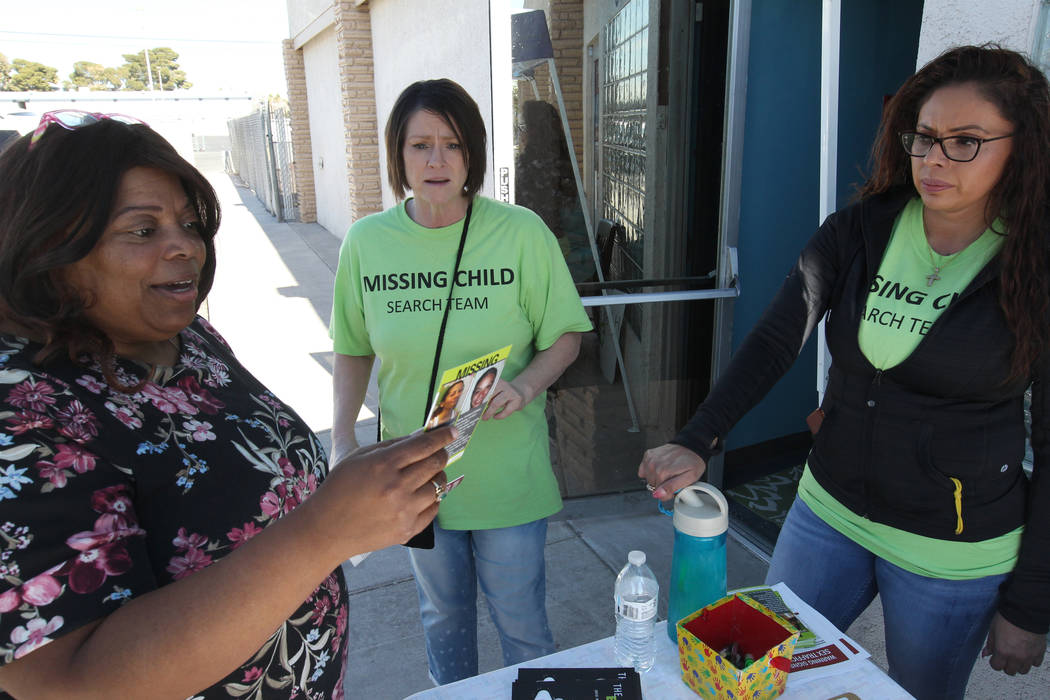 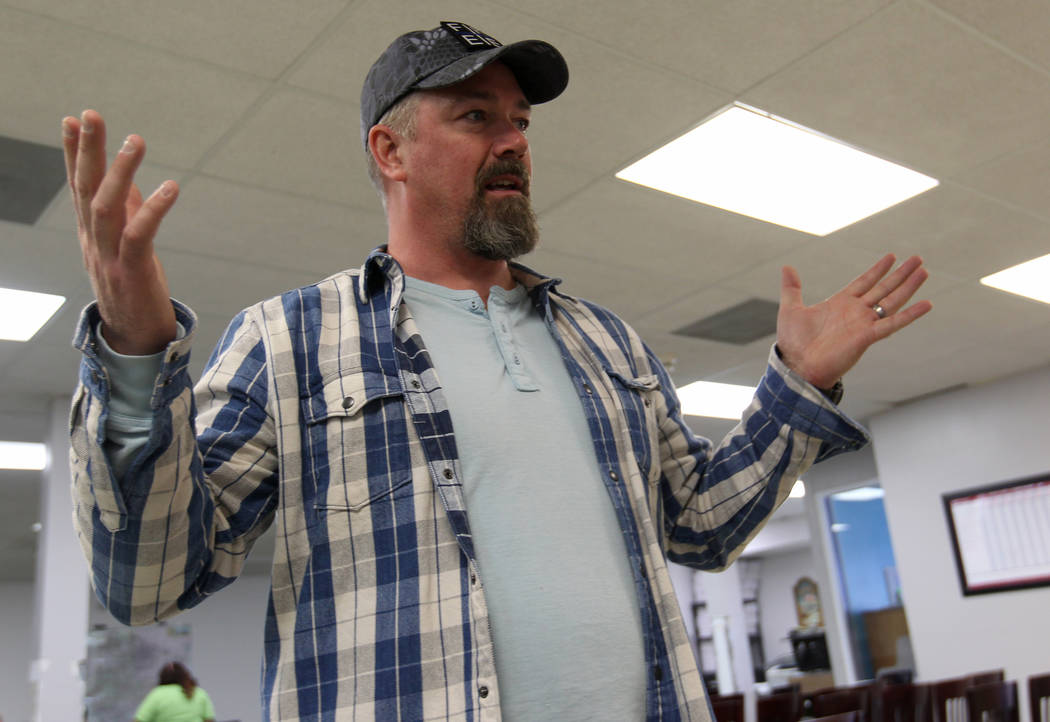 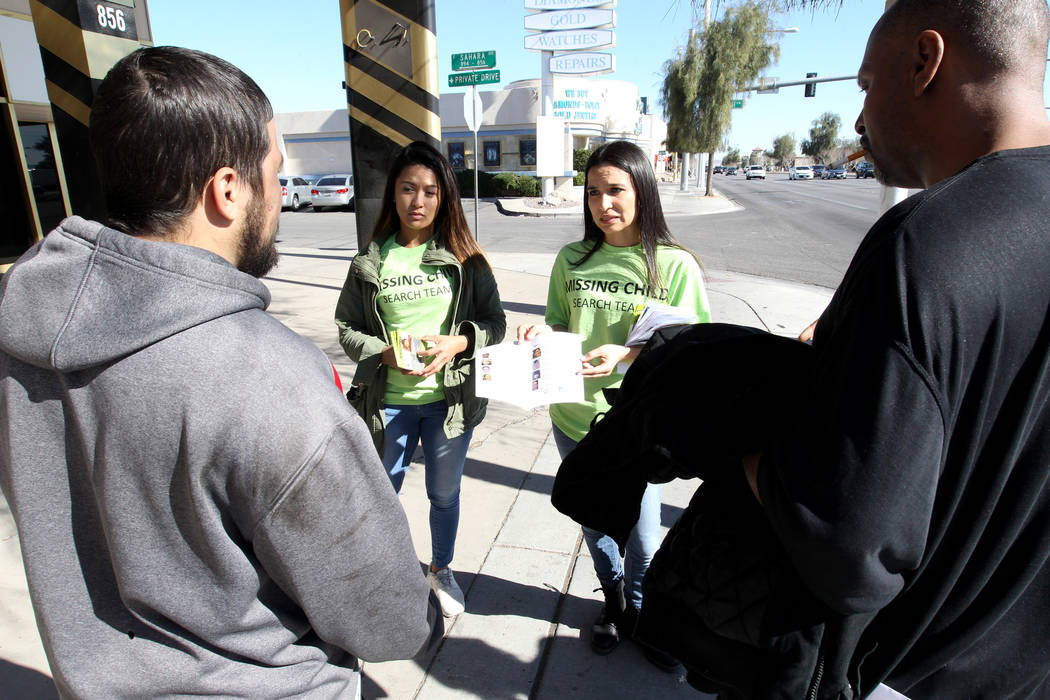 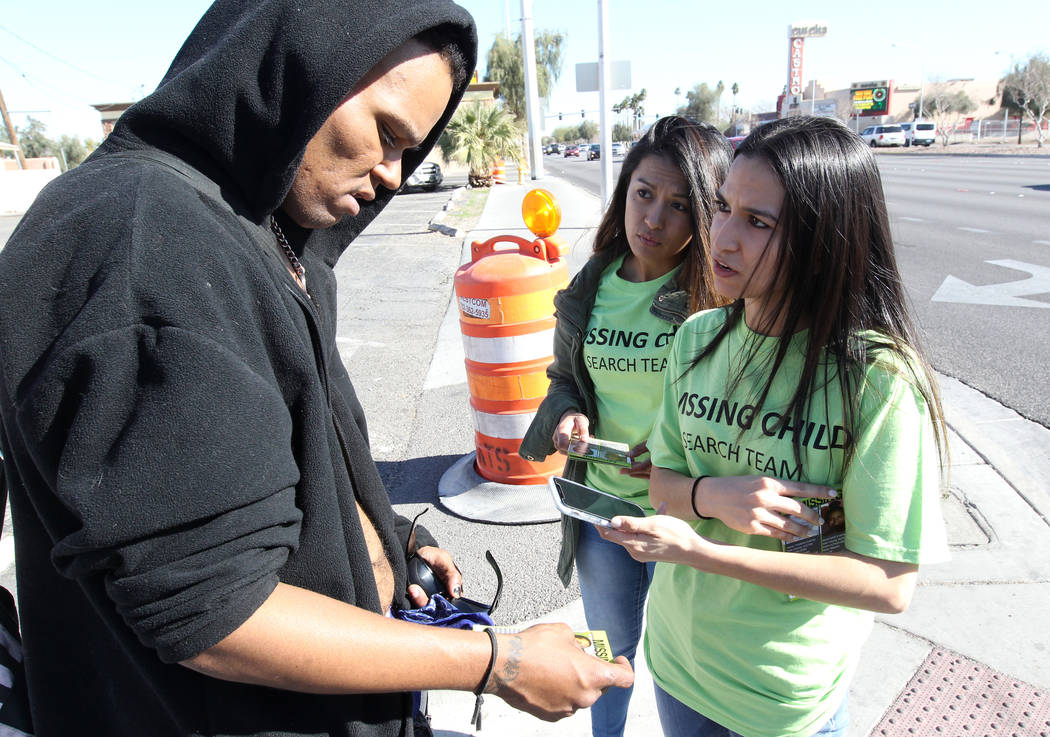 Valarie Goff, right, and Kristel Roxas, hand out flyers with photos of missing children to a man who gave his name as “Silent” on East Sahara during The Big Search campaign Friday, Feb. 2, 2018. Volunteers distributed the flyers throughout Las Vegas. K.M. Cannon Las Vegas Review-Journal @KMCannonPhoto 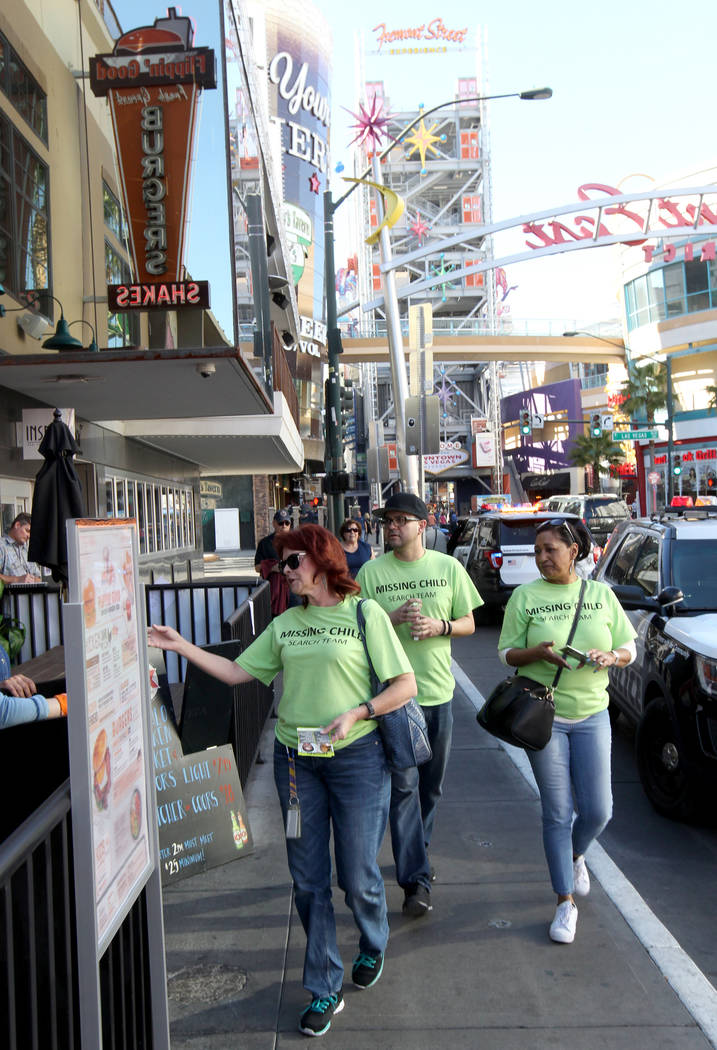 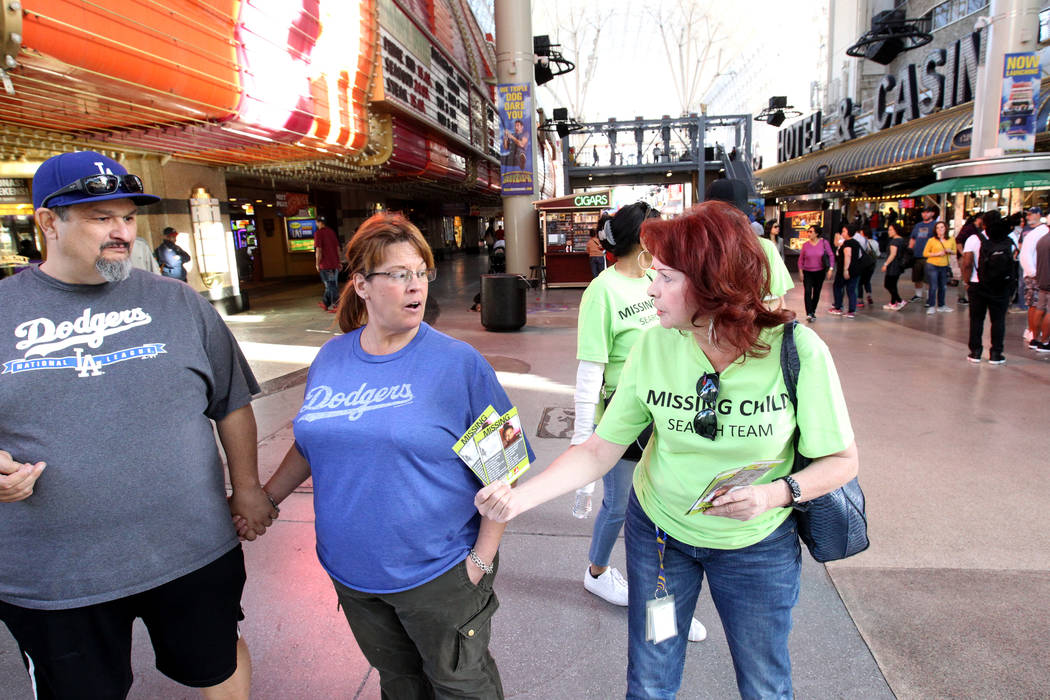 Annette Adams, right, hands out flyers with photos of missing children to a couple who declined to give their names at the Fremont Street Experience during The Big Search campaign Friday, Feb. 2, 2018. Volunteers distributed the flyers throughout Las Vegas. K.M. Cannon Las Vegas Review-Journal @KMCannonPhoto 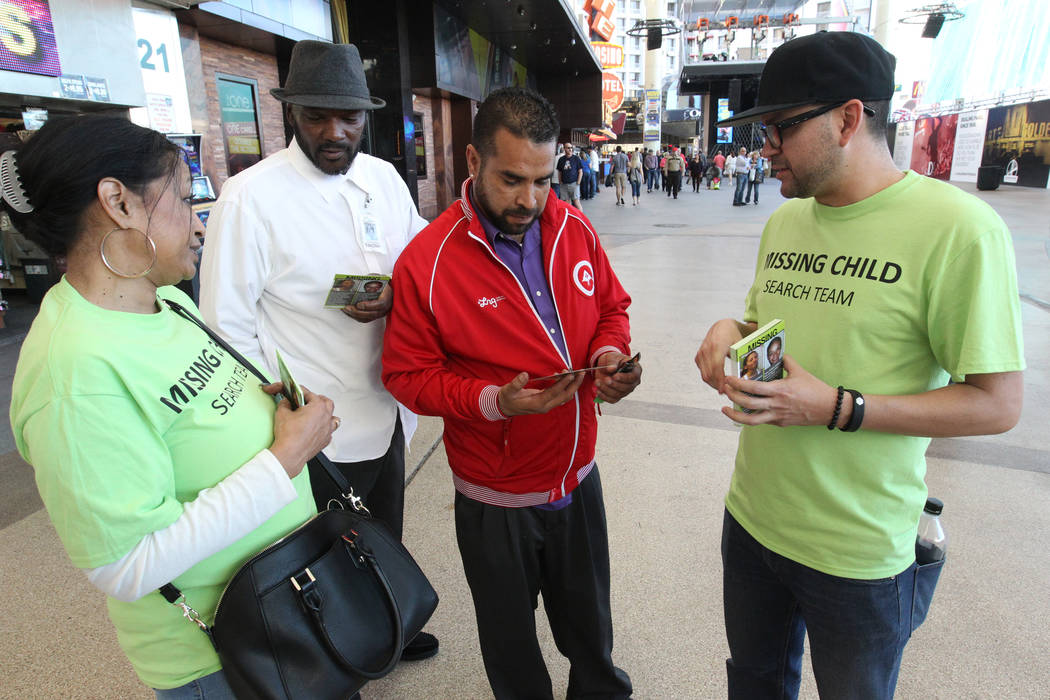 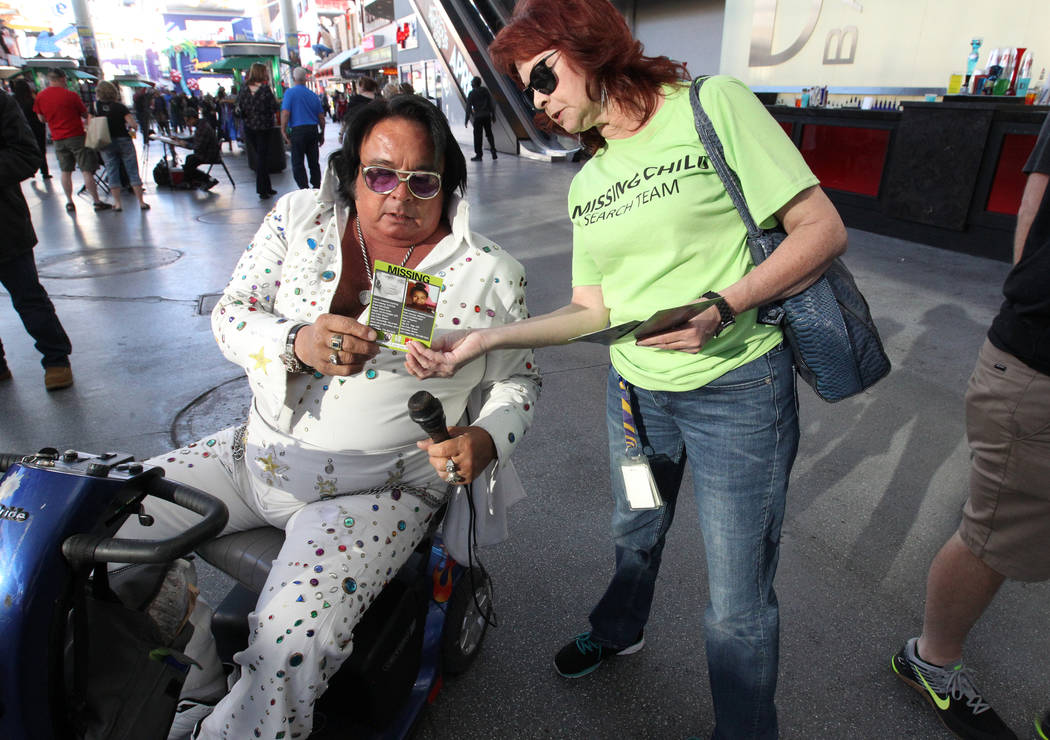 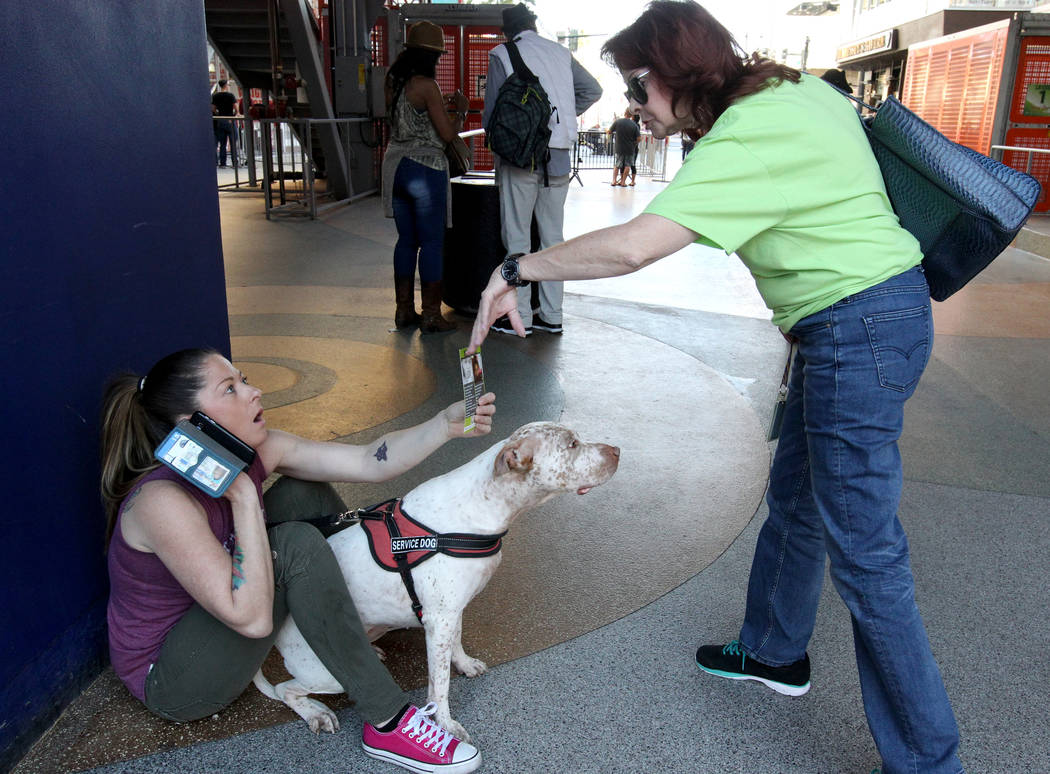 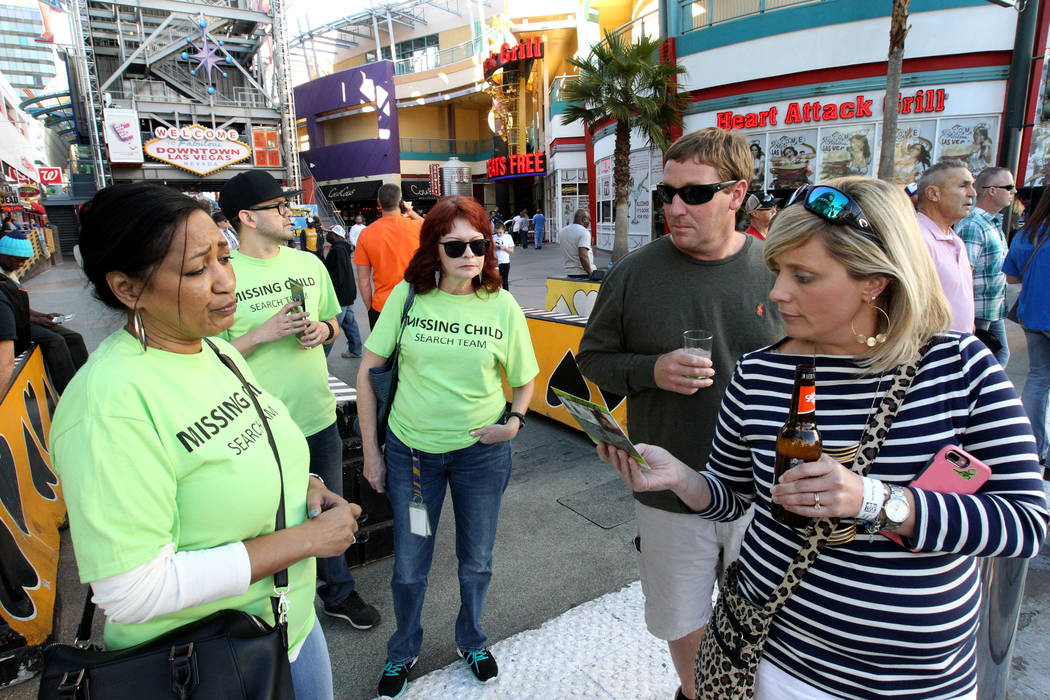 Wanda Ramsey, from left, Roberto Garcia and Annette Adams hand out flyers with photos of missing children to a couple who declined to give their names on East Fremont Street during The Big Search campaign Friday, Feb. 2, 2018. Volunteers distributed the flyers throughout Las Vegas. K.M. Cannon Las Vegas Review-Journal @KMCannonPhoto
Related Stories 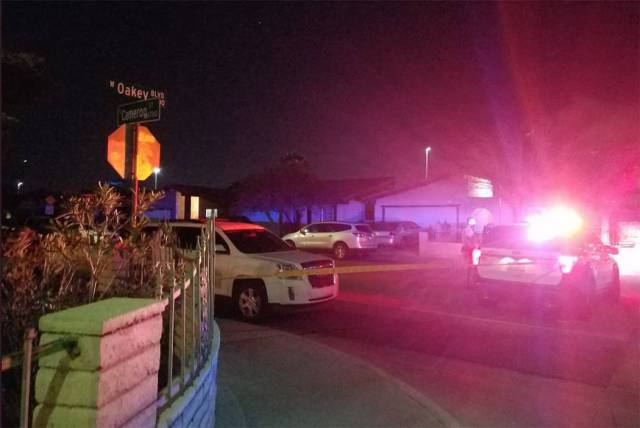 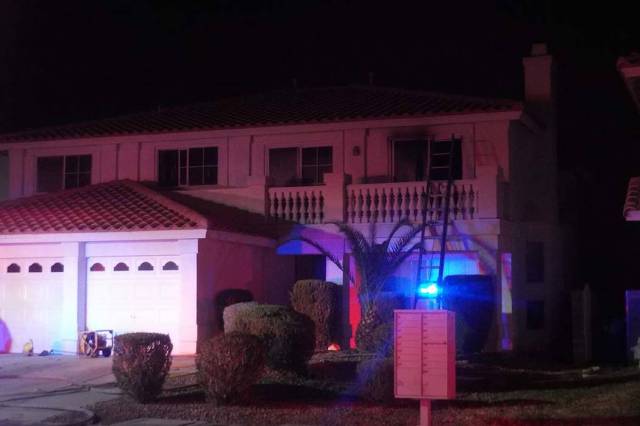 3 people in hospital after house fire in south Las Vegas 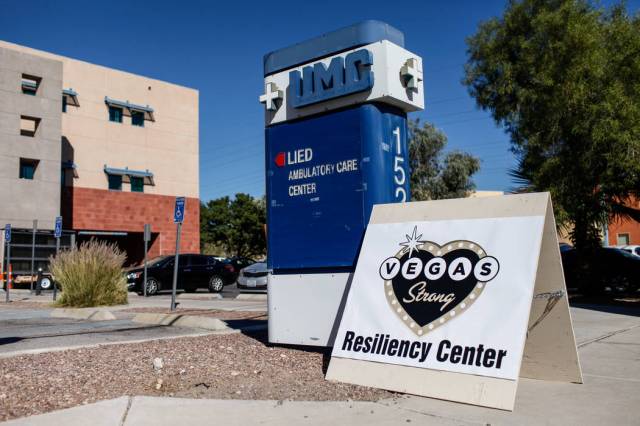 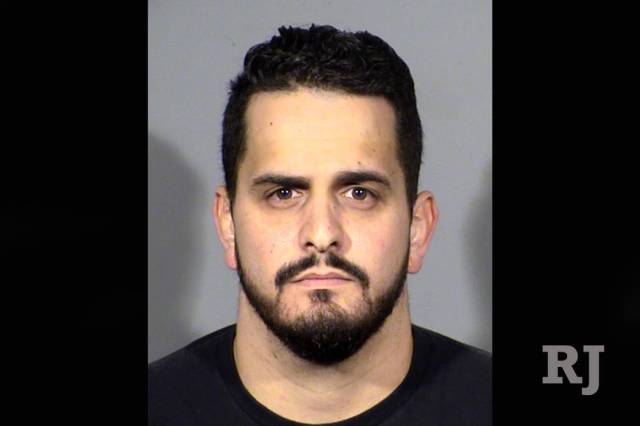 Walking along Sahara Avenue, Valarie Goff stopped a girl in an Adidas shirt with white headphones in her ears.

“Excuse me,” she said. “We’re looking for these missing girls, if you can keep an eye out.”

The girl, Vanessa Farfan, picked up the double-sided flyer that showed four missing girls. Goff also handed her a package with 30 other missing kids.

Farfan pointed to one of the girls: 17-year-old Ryder Cornell.

Goff, a woman’s outreach coordinator with F.R.E.E. International, a human trafficking advocacy group, and they were performing The Big Search.